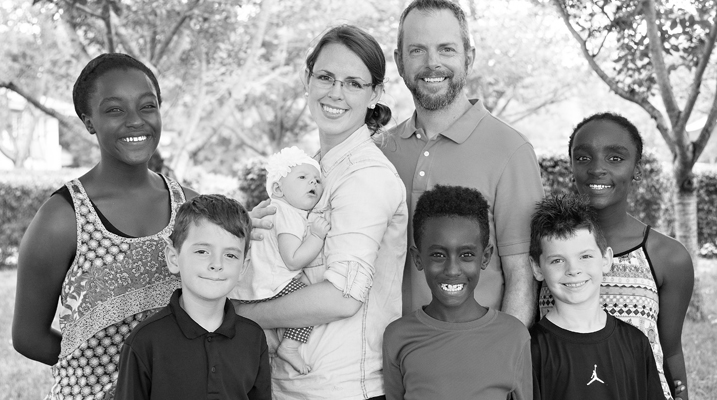 Bob is a graphic designer by trade and was working in southern Indiana when he was introduced to global missions in 2005 through the Perspectives on the World Christian Movement class. He had the opportunity then to travel with his church to Ethiopia, where he visited children at Mother Teresa’s AIDS orphanage, patients at the Women’s Fistula Hospital, and a boys’ home for struggling youth. Since then he has sought God’s leading for his involvement in international/cross-cultural ministry and has done short-term outreaches both domestically and in Jamaica.

Mary’s heart was taken for the nations in 2001 following a Discipleship Training School and outreach to the orphans and “untouchables” in India. God planted in her His passion for the hard-to-reach & vulnerable (especially Subsaharan Africa’s HIV/AIDS crisis, orphans, and the impoverished). God then equipped her professionally with medical skills (she’s a PA with a family practice and ER background), sent her on a few more short-term trips (domestic, Greece, Haiti), and connected her with a guy named Bob.

We were married in 2006, and became parents to a son in 2008. We lost a daughter before birth in 2009, then received a second son in 2010.  As we anticipated international ministry one day, we also knew from the beginning that adoption was part of God’s plan for the Fichtinger family. When our second son was a few months old, God said it was time, and we followed His lead to three of His precious ones waiting in Ethiopia for a family. In 2012, after nearly two years and with two trips to the country, we were able to bring them home. This began our first of many major family transitions and experiences of following Jesus as He bridged vast language and cultural differences.

By the end of 2015 God made it clear that it was time for our family to launch into full-time international ministry work. In summer of 2016 we moved to Perth, Australia, to join a YWAM base there. Here our entire family was introduced to global missions in an English-speaking, western environment for training. Mary studied in the Birth Attendant School and the family prepared for our first leg of outreach in India. Mary worked the labor wards in Hyderabad until she became too ill (because *surprise* she was pregnant!). The whole family was involved in ministering to the local churches, visiting postpartum floors in the hospitals, helping with pop-up clinics and children’s outreaches, and experiencing cross-cultural living.

From here God taught us that our next leg of service would be while living Stateside for a few critical years in our older children’s lives. We wrapped up in Australia and instead of continuing our planned service in Zambia and Malawi, we returned to the States to have a baby and prepare for our next steps as God directed them.

We accepted a ministry position with SIM in summer of 2017, and began raising support to work full-time with on the International Support Services team for Sports Friends. This is a program that equips churches all over the world to reach out to the young people in their communities by developing a sustainable sports ministry. Currently more than 10,000 volunteer coaches are sharing the love of Jesus in their own communities as well as entering into other particularly hard-to-reach areas; they are serving over 260,000 young people in 14 different nations. God has moved powerfully through this outreach strategy since its birth in Ethiopia in 2002 (our own children’s birth country). The International Support staff had been praying for years for a graphic designer and writer to join the overwhelmed team as they worked so hard to engage with, connect, serve, and expand to meet needs in so many different fields. The international office happens to be located in South Carolina, and they asked us to come.

We spent two challenging years working to raise our support while our oldest daughter finished high school in Indiana. Mary worked part time in the ER again, then Bob started helping remotely with pressing needs on the ISS team, while we thanked God for extra time with family and friends, and served in our home church. In a whirlwind of summer 2019, our oldest graduated and left for University of the Nations, we sold our house in Indiana, and we moved to the Carolinas.

Currently Bob is doing full-time graphic design and communications with Sports Friends ISS team, while Mary home-schools the three boys and writes part-time for the Sports Friends blog and their other publications. In 2020 we anticipate helping facilitate short trips to Sports Friends field locations to support the summer camps and encourage the coaches and teams. Mary is also contracted with Samaritan’s Purse Disaster Assistance Response Team, to respond to critical events worldwide.  She experienced her first DART deployment to help staff an emergency field hospital in Grand Bahama in September-October 2019, after Hurricane Dorian.

We are grateful for the roles that God has invited us into and sustains us in. We deeply value the fact that we only play one of countless critical parts in God’s work in the world. We go when and where He directs, an extension of the Body of Christ. He has knit us all together with a design and a purpose. Come along with us! Find your role and seek His kingdom first. It is our highest privilege, greatest joy, and in the end the only thing that remains.